Dislandia: a disturbing observance of a child existing in an indistinguishable time and place - shrouded by frustration and haunted by surrealist visions. Invited by communiqué, she ventures on a cathartic endeavor with a startling conclusion.

“for fans of early David Lynch and Alejandro Jodorowsky, as filmed by a cracked-out Salvador Dali…” – Synonymous

"Dislandia... is a quietly eerie, boldly stylized short. It plays out like home movies of a vaguely monstrous little girl wandering through a dying landscape." - John Chandler, The Portland Tribune

"I enjoyed the delicate grotesqueness"

"A sophisticated, yet troubling sense of eroticism"

mp3 (29.06 min/13.3mb) of the startling soundtrack in its entirety! Give an ear to Brad's sonicaly haunting soundtrack for immediate aural stimulation (quite a journey - indeed!). The Dislandia score is a mélange of folk, psychedelia, field recordings, Orientalism and African thumb numbin'.

leslie's (of smogland, ca) blog: adventures in randomness notes dislandia's impression upon her. dig it!

Dislandia is available to thee masses through the dvd comp: Cinema of Death (Cult Epics) which features cover art by brian viveros: "Underground Cinema first appeared in the 1960s with groundbreaking works by filmmakers as Kenneth Anger, Stan Brakhage and Andy Warhol, whose films dealt with provocative subjects such as politics, sex, magic and death. Cinema of Death compiles some of the most recent extreme films made, featuring raw, poetic, explosive images that will enter into and linger in the subconscious. " 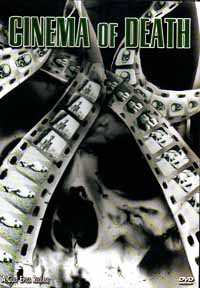 Dislandia is abstract in that it's not presented in the "mainstream" film format. It is a vehicle to the unconscious dream state. The resulting mood is dependent on each viewer's mindset.

Dislandia is our first reaction to our distaste of the mindless film fare generated for flash and consumption.